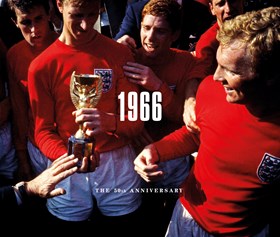 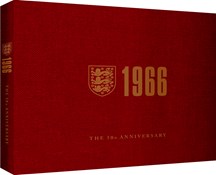 This lavish title is the only official book to commemorate the upcoming anniversary of England’s greatest sporting triumph.

Telling the complete story of the 1966 World Cup – the only time the tournament has been held in the UK – 1966 is a beautiful, coffee-table book and is presented in a souvenir real cloth slipcase with gold foil lettering. It contains previously unseen photography, items of memorabilia (including the players’ shirts and medals) and unseen documents uncovered at the FA’s own archive at Wembley Stadium.

The thorough and entertaining narrative of the tournament also includes the memories of the key protagonists in the story – from the players and manager to celebrities who were in the crowd, supporters, commentators and journalists.

With a foreword by hat-trick hero, Sir Geoff Hurst, 1966 is a wonderful reminder of a golden period in English history… a never-to-be-forgotten month in a summer when England ruled the footballing world.

A must-have for collectors and football enthusiasts, we have 500 limited edition copies of the book, individually numbered and signed by hat-trick hero Sir Geoff Hurst - still the only player to score three goals in a World Cup final!

Format: Hardback book in a slipcase

We are delighted to announce that 1/1000th - The Sports Photography of Bob Martin, won the Illustrated Book of the Year Award at last night's Cross Sports Book Awards. This is the fourth time in seven years that we, Vision Sports Publishing, have scooped the prize - something we are delighted about. Here's hoping that next year it could be 1966: The 50th Anniversary claiming the prize!

Other contenders for last night's award were Triathlon! by Matthew Baird, This is Anfield by Mark Platt, St Andrews in the Footsteps of Old Tom Morris by Roger McStravick, Le Tour de France - The Official Review 2015 (also published by Vision Sports) and Richie Benaud: Those Summers of Cricket 1930-2015 by Paul Connolly.

As the leading independent sports book publishers since our conception in 2003, Vision Sports Publishing strives to deliver stimulating and innovative books that we, as massive sports fans, would love to read ourselves.

Entirely committed to delivering high standards of writing, design and production, we pride ourselves on our reputation as a publisher of high quality sports books.

With a passion for all things sport - from football, rugby and tennis, to Formula 1, rowing and boxing - we are confident that we can find the right sports book for you.

An avid England fan and supporter of all things football, Batty is an esteemed football writer with a wealth of experience behind him. As well as being a freelance journalist, Batty is the author of a number of books, including The England Compendium and The Vision Book Of Football Records 2010-2016.